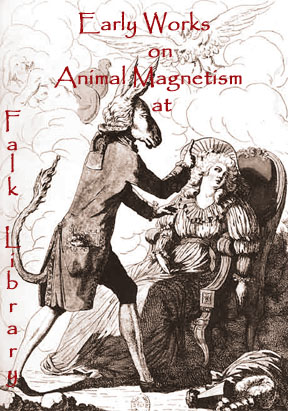 Animal magnetism is a healing system devised by Franz Anton Mesmer. It is based on the belief in the existence of a universal magnetic fluid that is central in the restoration and maintenance of health. The first seed for this thought was planted when he coined the term “animal gravitation” in 1776. Mesmer renamed this universal force to “animal magnetism” and articulated its basic principles in twenty-seven propositions in his Mémoire sur la découverte du magnétisme animal of 1779.

Mesmer’s interest in invisible forces found concrete expression in his early medical practice, where he experimented with using iron magnets to treat illness. Later, he used new techniques which involved “magnetic passes” or sweeping movements of the hands to direct magnetic fluid to diseased parts of the patient’s body. Using these methods, Mesmer performed some remarkable cures in Austria, Germany and France. He attempted to gain acceptance for his theory of animal magnetism from the medical establishment of Vienna, then in Paris.

The medical faculty of Paris was alarmed at the popularity of Mesmer’s clinics and two commissions were constituted to investigate animal magnetism. Both of them produced reports unfavorable to animal magnetism, but at the same time contributed to the popularity of the movement by initiating the wave of pamphlets and books supporting or objecting to conclusions of both reports. Some of those early works participating in the heated discussion on animal magnetism are exhibited here.

Animal magnetism, though completely forgotten today, influenced the future research. The most important stream – psychological – stemming from the discovery of “magnetic sleep” by Puységur paved the way for research in psychotherapy through the work of James Braid, Ambroise Liebeault, Jean-Martin Charcot and Sigmund Freud. The followers in medical stream pursue Mesmer’s interest in healing. They also used animal magnetism as anesthetic for surgery. The third stream – parapsychological – influenced by the romantic philosophy lead to experimentation with “magnetic magic”, paranormal phenomena, somnambulism, and eventually spread of spiritualism.

On display in the Falk Library lobby from June to August 2014, the original exhibit presented only the selected early texts on animal magnetism. This online exhibit has been expanded to include all eighteen and nineteen century works on the subject housed in the library's Rare Book and Special Collections. Some of the annotations come from Adam Crabtree's Animal magnetism, early hypnotism, and psychical research, 1766-1925 available at http://www.esalen.org/ctr-archive/animal_magnetism.html and include the reference number to the source of citation. The annotations without a reference number were created at the library.

Falk Library has only volume 12. Edited by Carl A. Eschenmayer,...

Notes and studies in the philosophy of animal magnetism and spiritualism. With observations upon catarrh, bronchitis, rheumatism, gout, scrofula, and cognate diseases. London: H. Baillière, 1867.

A London physician, and a friend...