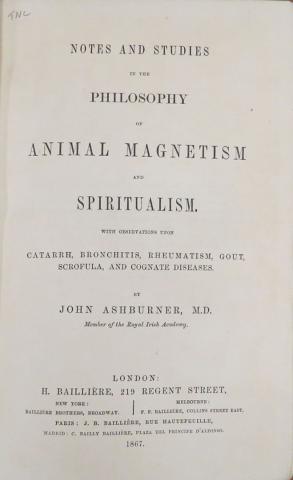 Notes and studies in the philosophy of animal magnetism and spiritualism. With observations upon catarrh, bronchitis, rheumatism, gout, scrofula, and cognate diseases. London: H. Baillière, 1867.

A London physician, and a friend of John Elliotson who wrote articles for Elliotson’s mesmeric journal, the Zoist. Ashburner had become convinced of the reality of animal magnetism in the 1840s. In the 1850s he came to believe that spirits are able to manifest and communicate with the living, that the force involved in animal magnetism and that involved in spirit manifestations are identical, and that the phenomena manifesting in both experiences were compatible with Christian belief. Notes and Studies is an attempt to bring together the traditions of animal magnetism, spiritualism, and Christianity.