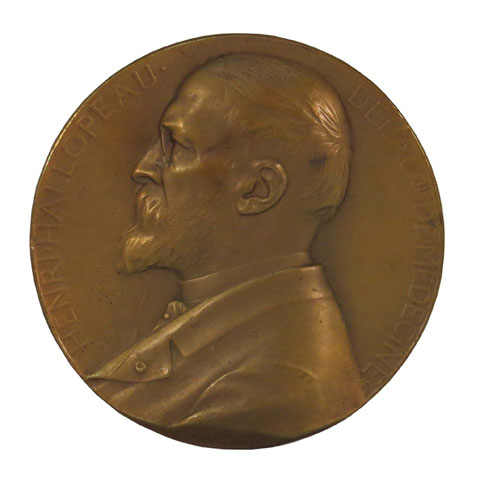 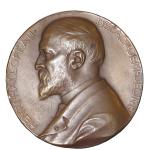 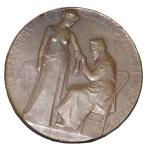 Francois Henri Hallopeau (1842-1919) completed his medical education in Paris in 1871. After practicing neurology for several years he turned to dermatology. He contributed to the description of various diseases, from cutaneous tuberculosis to the compulsive pulling out of hair (trichotillomania) which he described in 1889. He was a cofounder of the French Society of Dermatology and Syphilology. He practiced at l’Hôpital Saint Louis in Paris from 1884 until his retirement in 1907, but continued to be a consultant for the rest of his life.

Bronze. France 1907. Signed. Lifetime. On the occasion of his promotion as officer of the Legion of Honor, and his retirement after 25 years at the Hospital St. Louis.

At right, a physician wearing cap and apron, seated to left in chair, examining arm of a young semi-nude woman who stands facing him slightly to right; in background, table with instruments; in a curve along edge from lower left, PRIMVM ∙ MVLTOS COGNOVIT ∙ CVTIS ∙ MORBOS ∙ ; in exergue, MDCCCCVII.

Do you know more about this? Share your knowledge.