The vast majority of the books on dentistry comes from the former collection of the School of Dentistry Library. Under the nurturing influence and support of Dr. H. Edmund Friesell, dean of the school (1903-1946) and a collector of autographs, the library assembled a comprehensive collection of dental literature. It includes such gems from dental and related fields as: Arcolani’s Practica (1504 and 1557), Ryff’s Neu gross distiller (1556), Charleton’s Natural history of nutrition, life, and voluntary motion (1659), multiple 18th century editions of Fauchard’s Le chirurgien dentiste, Herbert’s Le citoyen dentiste (1778), Hunter’s The natural history of the human teeth (1771 and 1778), Hurlock’s A practical treatise upon dentition (1742), Tillet’s Traité complet de l’art du dentiste (1828, written under a pseudonym F. Maury), Mouton’s Essay d’odontotechnie (1746). The Dental Library legacy left us with an impressive selection of materials gathered by W. Harry Archer on discovery of anesthesia and its discoverer Horace Wells as well as an almost complete collection of early dental Americana. The latter includes works of Woofendale (1783), Skinner (1801), James (1814), Parmly (1819), Flagg (1822), Gidney (1824), Koecker (1828), Wells (1838), and Harris (1839). 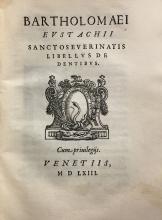 Among many rarities and classics are three books by Giovanni Arcolani - pioneer of the surgery of the mouth, including his Practica discussing use of gold leaf in fillings (1504, 1557) and  the oldest book in the library - Expositio in primam fen quarti canonis Avicenne (1496);

Pierre Fauchard’s Le chirurgien denstiste (1728) comprehensive and detailed work of odontology which changed the practice of dentistry and transformed it from a trade to a profession;

Philipp Pfaff’s Abhandlung von den Zähnen des menschlichen Körpers (1756) — the first scientific book on dentistry published in Germany known to include the earliest account on the use of plaster models of teeth;

Charles Allen’s Curious observations in that difficult part of chirurgery relating to teeth (London 1687) - a reprint of the first dentistry book in English published in Dublin a year earlier as The operator for the teeth;

Richard C. Skinner’s A treatise on the human teeth (1801) – the first book on dentistry published in United States and written for the general public not for the professionals.

Search Pittcat to find all the books on the subject including the late 19th and early 20th century historical materials and current works from the circulating collection.